CBC News has obtained data showing the results of approximately 14,000 radon tests in homes across the country, which show that over 1,500 homes Health Canada tested had radon levels above the department’s guidelines.

Want to know the radon test results in your neighbourhood? Search our interactive map. CBC News has plotted the radon results across the country from Health Canada’s survey.

Radon is the second leading cause of lung cancer in Canada after smoking. It’s a radioactive gas naturally emitted from the earth through the breakdown of uranium in soil. It enters your home by seeping in through cracks, pipes, windows and the foundation of your house.

The Canadian guideline for radon in indoor air is 200 becquerels per cubic metre (200 Bq/m3). The data obtained by CBC News shows that the five highest results in the country were found in:

In 2012, Health Canada released a reportshowing that 6.9 per cent of Canadians are living in homes with radon levels above the current guideline. The results were based on a two-year survey of approximately 14,000 homes across the country.

“I’d like to see legislation. I’d like people be required to test,” says Anne-Marie Nicol, an assistant professor of health sciences at Simon Fraser University. Health Canada recommends that you take action if the radon levels in your house are 200 Bq/m3 or higher.

But it is not a requirement to test for radon or take any steps if you have high levels. Radon levels can vary from one house to another and Health Canada recommends that everyone test their home.

Of the homes that Health Canada tested in the survey, approximately 1,557 of them had results above the guideline of 200 Bq/m3. 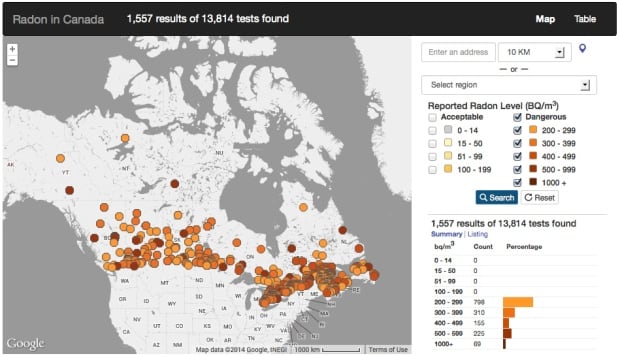 Click on the link to the left to explore our interactive map of radon levels across Canada. (CBC)

The World Health Organization recommends the guideline for countries be 100 Bq/m3. Data obtained by CBC News through an Access to Information request shows that 2,514 additional homes tested in Health Canada’s survey have radon levels between 100-199 Bq/m3. According to the WHO, the risk of lung cancer increases by 16 per cent per 100 Bq/m3 increase in radon concentration.

Nicol thinks that in comparison to the action other countries have taken against radon, Canada needs to adopt more stringent policies.

‘It’s about saving lives. It’s also saving suffering…. We all can die sometime from something, but no one should have to die from what I saw. It’s a terrible way to die.’— Dana Schmidt, who lost his wife to lung cancer in 2009

“Things like requiring to test homes. The real estate transaction seems to be a very rich potential, and they’ve tried it in different countries. And in the U.K. there’s issues around getting a mortgage. You can’t get a mortgage in some places unless you’ve actually shown that your house is habitable. So there’s other mechanisms that other countries have tried that seem to be effective that just haven’t, we haven’t gotten there yet as a country. So I think there’s still lots that we can do.”

Widower takes up the radon battle

Dana Schmidt would like to see more being done to prevent Canadians from being exposed to radon. Schmidt lost his wife Donna to lung cancer in 2009. She died within three months of her diagnosis. She had been a smoker, but quit 20 years prior to contracting the disease. She had been active and healthy, so when Schmidt found out she had lung cancer it took him by surprise. He began to look for other answers.

“I was looking through the literature and the word lung cancer and radon popped up.” 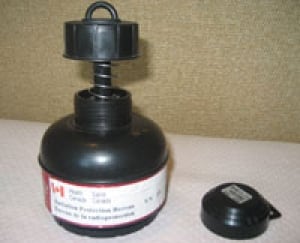 Health Canada recommends that homes be tested for a minimum of three months, ideally in the fall or winter. The cost of radon testing is approximately $50 to $100. (Health Canada)

Schmidt tested their home in Castlegar, B.C., and found that it had radon levels almost double the guideline set by Health Canada. He and his wife had been living there for 15 years.

After his wife’s passing, Schmidt became active in making sure as many people as possible know of the risks associated with radon. He set up the Donna Schmidt Memorial Lung Cancer Prevention Society and began sending out radon test kits to people in the surrounding area.

“It’s about saving lives. It’s also saving suffering…. We all can die sometime from something, but no one should have to die from what I saw. It’s a terrible way to die.”

Of the thousands of results he has received, almost half of the homes have radon levels above Health Canada’s guidelines.

Schmidt thinks that introducing mandatory testing during real estate transactions could be one way to ensure more Canadians are living in safe homes.

In 2007, Health Canada considered making testing during real estate transactions mandatory, but decided otherwise.  According to a 2007 Canadian Real Estate Association document, Health Canada “has abandoned this approach at the present time due to concerns raised by industry groups, including CREA.”

Health Canada says that such requirements would have to be adopted at local level. “It’s not going to be a requirement at least from our perspective. It may very well happen that provinces or some municipalities that know that they have high levels of radon in their area may decide to be more proactive on radon and require it. And if that happens that’s fine … but it’s not something that we’re going to require,” says Kelley Bush, head of radon education and awareness with Health Canada.

If you have information about this or other investigative stories, please contact [email protected].

What other countries are doing about radon:

In the U.K., home sellers must disclose if they live in a radon-affected area and provide a radon warning statement to the buyer. And several states in the U.S have similar requirements. The U.K. also requires landlords to have a hazard assessment done for properties in radon-affected areas. Depending on the severity of the risk determined by the assessment, the local housing authority is obligated to take appropriate enforcement action. There are no requirements in Canada for landlords to test for radon levels.

Testing for radon in Canada is also not required in all workplaces, schools or daycares. Some municipalities have adopted more rigorous requirements, but it’s a patchwork system.

Last year, the state of Illinois enacted a law that made it mandatory for all licensed daycare centres and daycare homes to test for radon. And as of this January, in order to renew their licence or as part of an initial application, daycares need to show proof they have been tested within the last three years.

In Ireland, between 1998 and 2002 the Department of Education invited all schools in the free education system to be tested for radon, and  3,444 ground-floor classrooms and offices were tested as part of the survey. All schools with radon levels above 200 Bq/m3 were successfully modified. The survey represented over 85 per cent of the approximately 4,000 primary and post-primary schools in the country.