Parents came to the Jack Donohue Elementary School gym Wednesday night with questions about high radon levels of gas, asking why they heard about it in the middle of the day while their children attended class outside the building.

On Tuesday, 35 teachers and staff started a work refusal after they were told the Kanata school had high radon levels above Health Canada’s guidelines.

Teachers agreed to hold classes outside and the principal tried to arrange to distribute sunscreen.

“Even though it was a work refusal, all of us still worked all day. We still fulfilled our teaching duties, but outside,” said Cindy Wynter-Francis, a teacher in Grades 1 and 2.

French immersion teacher Tracey Haley said the teachers wanted to make sure the school board acted on the information.

“It was the best thing for us to do to get this out in the open,” she said.

The Ministry of Labour investigated and deemed the school safe for students and staff later Tuesday. It’s also monitoring the school’s remediation efforts.

Zhanna Parashchuk’s children in Grades 1 and 8 weren’t sure why they had class outside most of the day.

“I think there was a bit of confusion when the kids came home. They thought the school was being tested at the time,” she said.

Parashchuk said she has concerns about whether her children were exposed to the highest concentrations of radon and what the long-term effects might be. 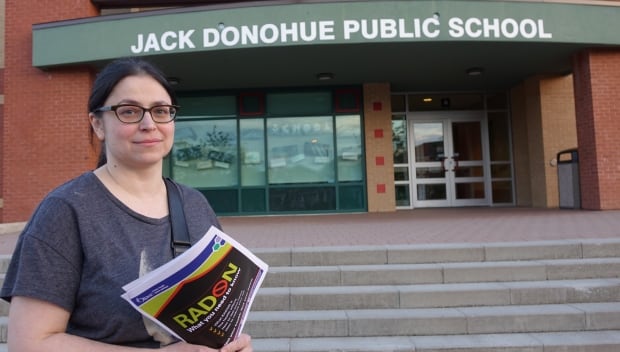 Zhanna Parashchuk, who has two children in Grades 1 and 8 at the school, says she’s concerned that children were in areas with high exposure to radon gas. (Matthew Kupfer/CBC)

Principal Cindy Alce said communicating the issue was a tough lesson for the school.

“If it ever happens to me again — and I pray it does not — we will be communicating sooner rather than later,” Alce told the parents.

She also said the school would make sure children apply the sunscreen they provide after a handful of parents said their children came home with serious sunburns.

Heather McCulligh said she was ultimately more concerned about her daughter coming home with serious sunburns Tuesday than with radon exposure, which takes a long time to have a serious health impact.

“I think that the risk that the teachers put the children at by having them out all day in the sun at this time of year was a greater risk than continuing to work within the school, given the elevated radon levels,” she said.

Radon gas is an invisible, odourless and tasteless radioactive gas. It’s released naturally when uranium in soil breaks down. Prolonged exposure at high levels can present a health risk.

The level of risk depends on the level of radon, length of exposure and smoking habits or exposure to second-hand smoke. Radon is the leading cause of lung cancer among non-smokers in Canada.

The Ottawa-Carleton District School Board had representatives from Ottawa Public Health and from Health Canada’s radon awareness program to speak to parents Wednesday night.

The board also presented the results of testing from March, which were published in a letter to parents on Tuesday.

The test results showed eight areas had levels of radon higher than Health Canada’s guideline of 200 bequerels per cubic metre (200 Bq/m³). Seven areas had results between 200-600 Bq/m³ and one area — the front office — had results above 600 Bq/m³. 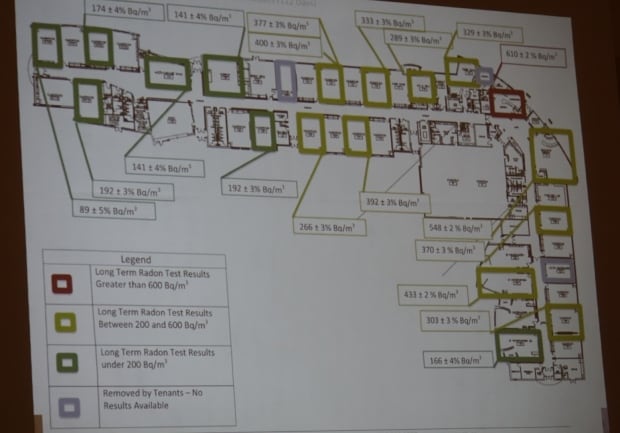 A slide from the presentation at Jack Donohue School shows where high levels of radon gas were detected. Yellow indicates rooms where the level was above Health Canada guidelines. Red is the front office, where concentrations were highest. (Matthew Kupfer/CBC)

Miro Vala, facilities manager for the school board, said the concentration was in part because of problems with the ventilation system. He said test results for four areas of the school have gone missing.

The school board already made preliminary repairs before releasing the initial results and tested again.The new results showed only three areas had levels between 200 and 600 Bq/m³ and no area had higher levels.

The school board will be doing additional remediation work over the summer, including changes to the mechanical system, ventilating radon gas from the ground beneath the school and long-term testing to monitor the situation.

The school board said it is in the process of five years of testing radon levels in buildings across the city. This is the second year of testing and Jack Donohue school is the first building to have an issue with high concentration.

Superintendent Brett Reynolds said the board is considering speeding up the testing and remediation process.

Kelley Bush, a radon expert from Health Canada, said the most important thing parents could learn from the situation is to test their own homes for high levels of radon gas.

“The risk from radon is cumulative, like any radiation exposure. You spend a lot more time at home than you do at school,” she said.

But, Bush said, parents do not need to be concerned about children returning to classes that may have a higher level of radon for a few months as the school fixes the building.

Ottawa Public Health sells home kits to test for radon over a period of three months to a year for $21.50 at 100 Constellation Dr. or visit order a professional radon here